What we talked about for libraries

The 14th Conference of the Serbian Library Association “What I Talk about When I Talk about Libraries: Advocacy, Promoting and Lobbying” was held from December 13th to 15th, 2017 in Belgrade, in this way marking the Librarians’ Day and the 70th anniversary of the foundation of our Association.
A great number of guests and colleagues from Germany, Austria, the USA, Croatia, Bosnia and Herzegovina, Romania, Latvia, Slovakia and Cyprus joined the colleagues from Serbia.

The preconference started at the University Library “Svetozar Marković” with the workshop “Advocating for Libraries” conducted by Edita Bačić and Davorka Pšenica from the Croatian Library Association. The workshop was attended by 70 librarians from all types of libraries. We had an opportunity to get acquainted with the experience from neighbourhood and to get inspired for the future steps of advocating, regional cooperation and development of advocacy strategy at the national level. In the second half of the day, at the unconference, we had a chance to see how the conversations and creative approach to challenges we encounter in our profession could be sparked in an informal way. The guest of the unconference was Mašo Mehmedović from Bosnia and Herzegovina, a young librarian who had just finished making his documentary film Pokret za narodnooslobodilačko bibliotekarstvo Bosne i Hercegovine (A National Liberation Movement for Librarianship of Bosnia and Herzegovina). After the interview with Mašo, a number of discussions on selected topics were launched, which were followed by a series of interviews that dealt with stereotypes, characteristics that a 21st century librarian should possess and an everlasting topic – graduate librarians vs. librarians from other professions. 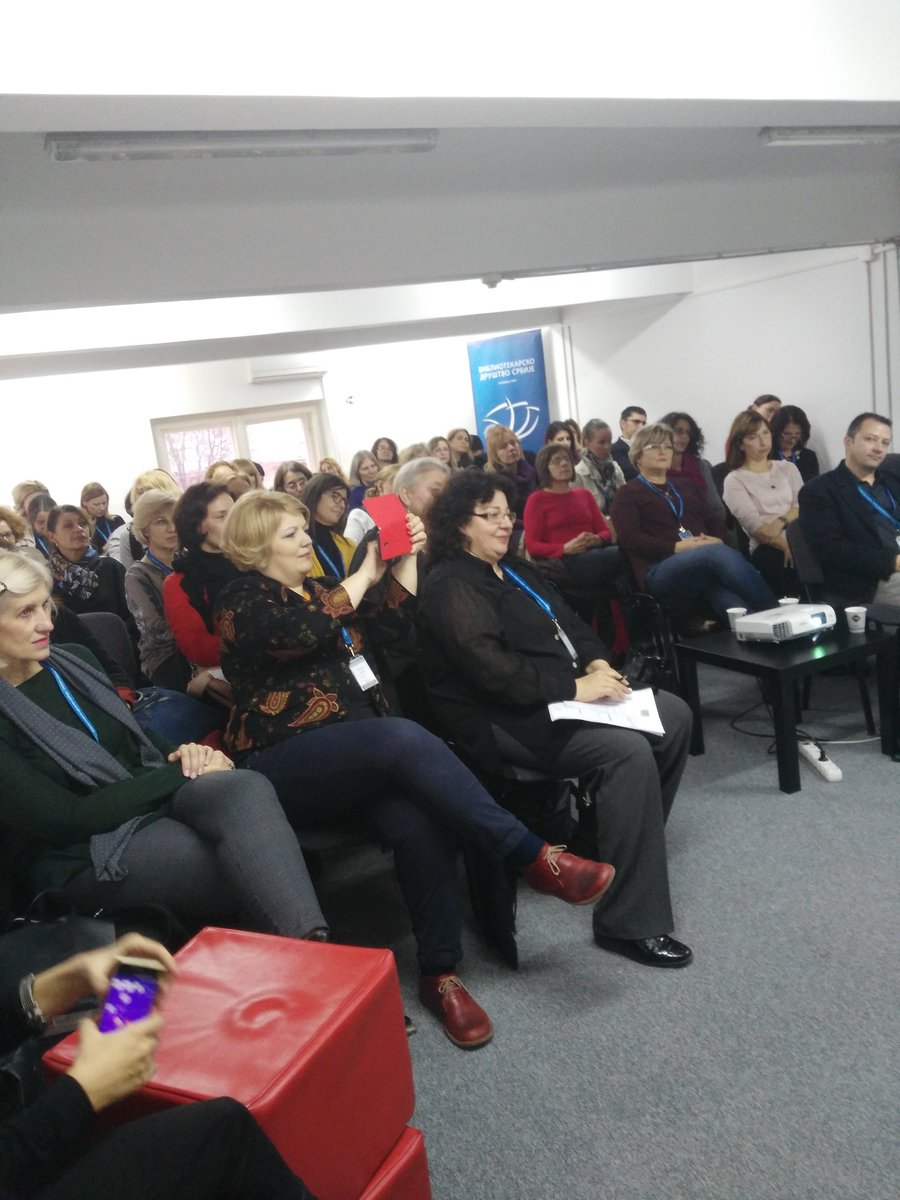 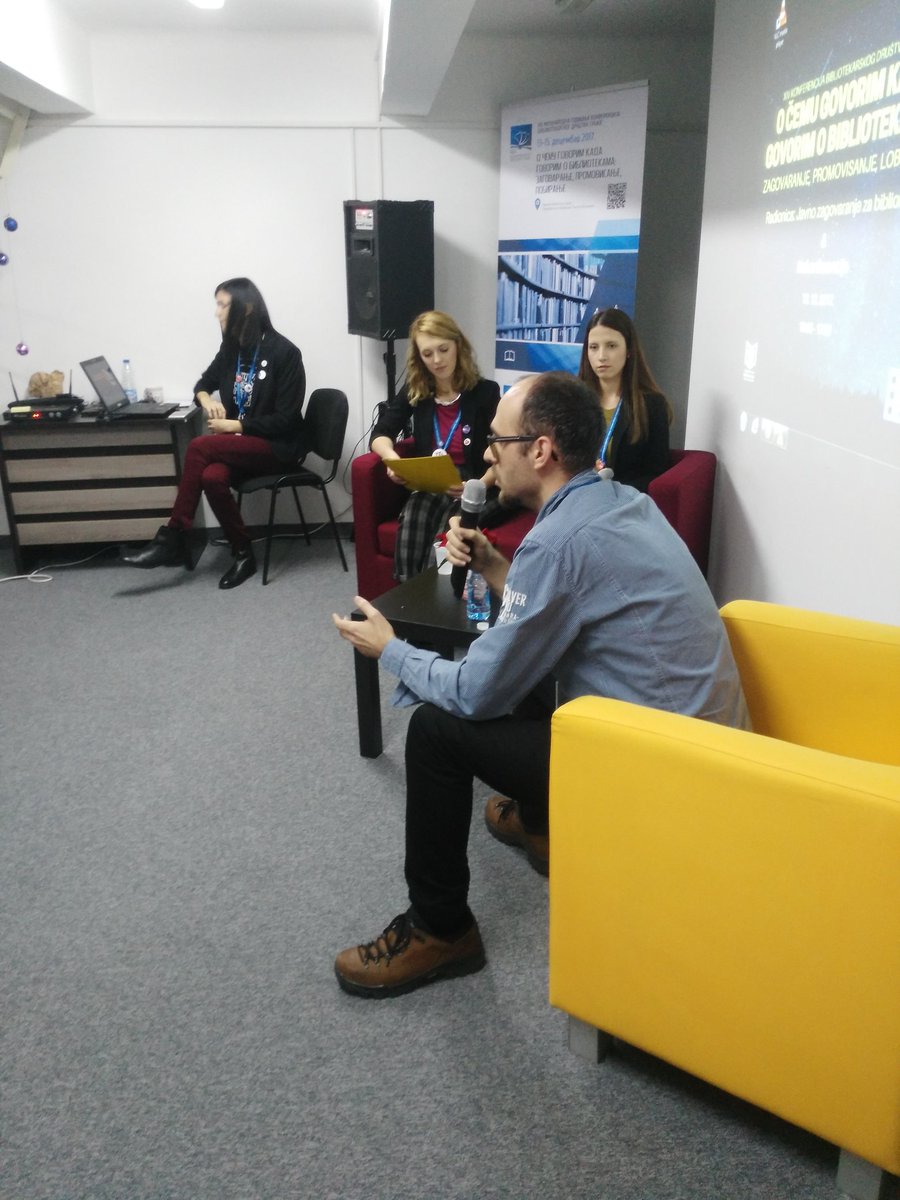 The day was finished with Silent Disco! Ceremonial Assembly
The 14th of December started with a ceremony on the occasion of the Librarians’ Day and the 70th anniversary of the founding of the Serbian Library Association. Bogdan Trifunović, the president of the Serbian Library Association, Vladan Trijić, vice director of the National Library of Serbia and Novka Šokica from the Matica Srpska Library addressed the librarians, after which the annual awards were presented: 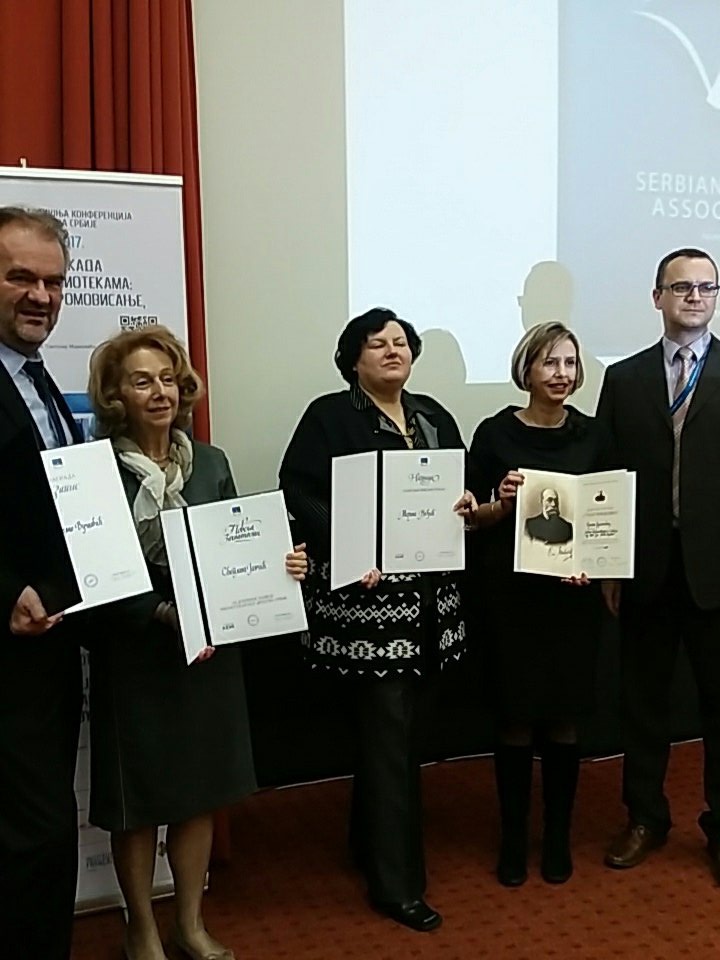 The ceremonial speech, given by Svetlana Jančić on the occasion of the 70th anniversary of the founding of the Association was presented as an overview of the history and development of this Association even before 1947 up to this day. It was followed by a big round of applause.
During the ceremony that marked the National Librarians’ Day and jubilee of the SLA, the second issue of the scientific journal Bibliotekar, dedicated to the Association’s jubilee, was presented by Dragana Grujić, PhD, editor in chief. All the registered participants of the Conference got a copy of this issue as a part of the conference material, together with a copy of the Proceedings from the last year’s Conference „Users of Library Services: Historical Perspective and Contemporary Tendencies“. Thanks to the support of the Secretariat for Culture of the City of Belgrade, the Proceedings were published both in the Serbian and English languages, with 20 papers printed on 410 pages.
Conference
The Conference was opened by Karla Robin Hershey, the UN Resident Coordinator in Serbia, who talked about the relation between libraries and sustainable development goals that constitute the 2030 Agenda. She pointed out the access to information to be the key factor in accomplishing the goals of sustainable development, together with the services offered by libraries. 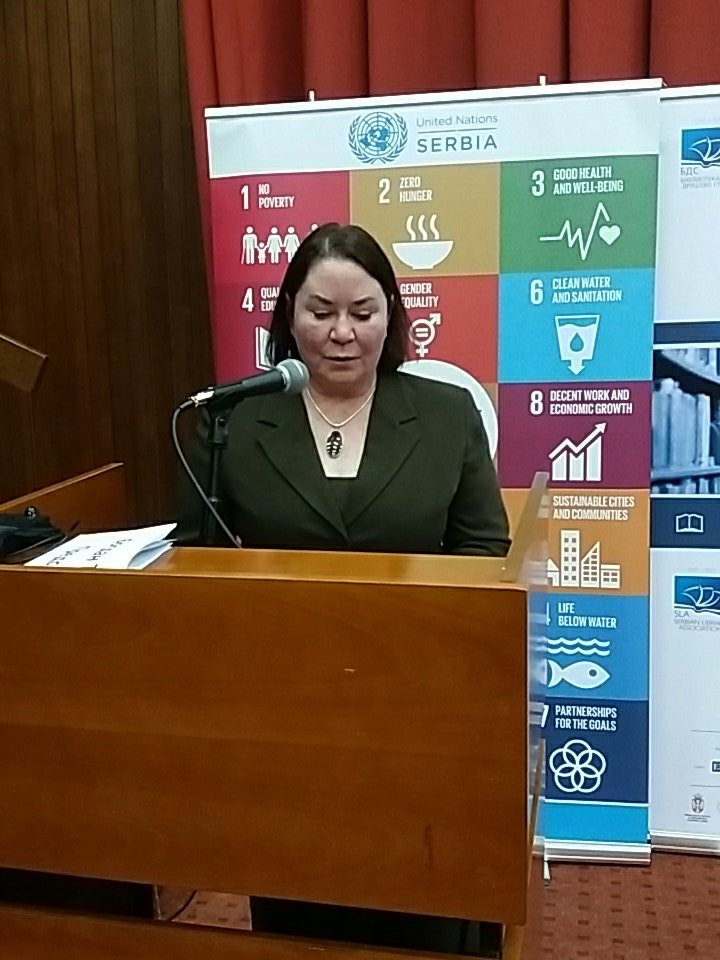 Vesna Vuksan presented a short report on activities that the Serbian Library Association participated in within the 2030 Agenda context: participation in the IFLA International Advocacy Program, accredited course for librarians Ko to tamo priča? (Who’s Talkin’ Over There?), projects Stories that Matter and Unlocking the Potential of Libraries in South-East Europe through Regional Cooperation and Sustainable Development.
Glòria Pérez-Salmerón, the president of IFLA, addressed the librarians via a video message where she pointed out the support given by IFLA to the Serbian Library Association and wished everyone a successful conference. And the Conference started! :star:
Loida Garcia-Febo, the elected president of the American Library Association (ALA), talked about multiple activities conducted by the ALA with the aim of enhancing visibility and improving the status of libraries. Barbara Schleihagen, the executive director of the German Library Association presented her experience from Germany, talked about priorities and strategies of advocating, but also about barriers among which she emphasized the lack of coordination of advocating initiatives. Apart from the stories told from the librarians’ point of view, Nenad Vasić, PhD, presented lobbying from the viewpoint of someone who did lobbying in a professional manner, as a member of the Serbian Lobbyists Association. Lectures, stories, posters and films from the “field” thrilled the audience: the librarians from Bosnia and Herzegovina, Croatia, Serbia, Latvia, Romania and Slovakia talked about challenges and advocacy, ranging from legal and social framework, creative advocacy, green libraries, book activism, artists as advocates, school experience, educational workshops, to the use of public and media space for advocating. Some segments of the Conference were recorded with a camera, and soon there will be a video! 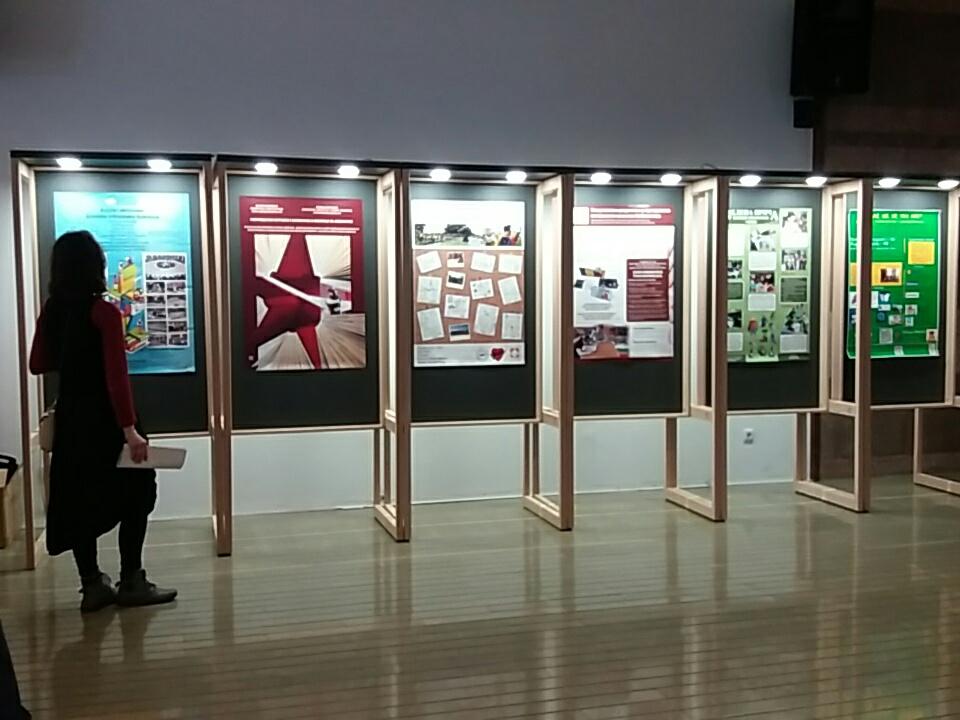 The workshop Presentation Skills conducted by Relja Dereta sparked great interest among participants – all of us can become outstanding public speakers on every occasion if we apply creative approach and good practice.
The Conference participants visited the National Library of Serbia, the University Library “Svetozar Marković”, the Book and Travel Museum and the Museum of Serbian Literature conducted by the Society Adligat in Belgrade. The Serbian Library Association is thankful for the support given by the Ministry of Culture of the Republic of Serbia, the National Library of Serbia, the University Library “Svetozar Marković”, the Faculty of Philology University of Belgrade, the United States Embassy, French Institute, the Book and Travel Museum of the Society Adligat, Faculty of Music and sponsors Trevis, De Gruyter, EBSCO, Cards Print, the Čoka Winery and Autoprevoz Čačak.
Volunteers, thank you all wholeheartedly!